More than 600 members of the professional communities from different regions of Russia took part in that unique legal event.

From 3 to 10 November the Siberian legal week - the business forum SibLegalWeek-2017 was held in Novosibirsk for the third time.

That time, the number of the registered forum participants in different events exceeded 1100 people, and the geography of the participants and speakers covered the whole country - from Moscow and Saint-Petersburg to Vladivostok, including strong points in Yekaterinburg, Chelyabinsk, Tyumen, Ivanovo, Tomsk, Kemerovo, Omsk, Barnaul, Krasnoyarsk, Blagoveshchensk. 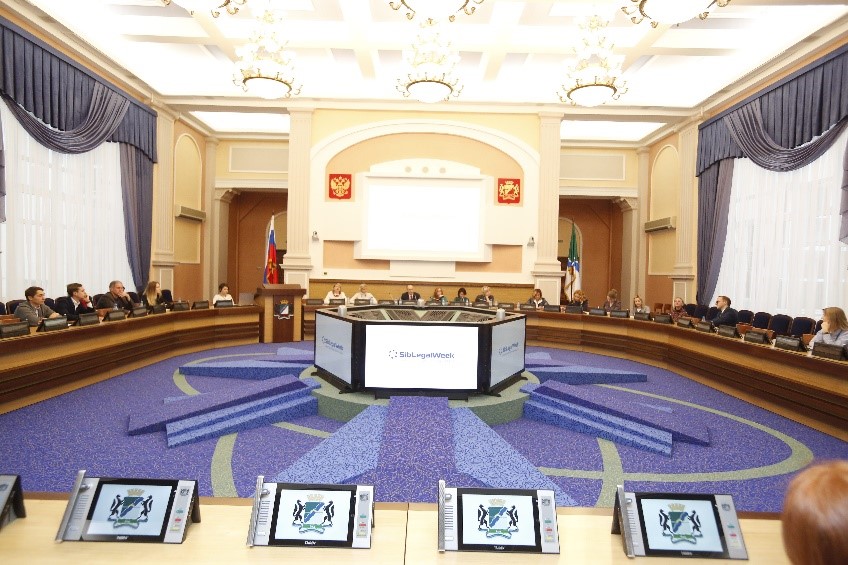 "Dialogue between government and business: obstacles and opportunities" - for the dialogue to be really held and to be interesting and useful, we gathered representatives of all governmental branches, the business community, practicing lawyers, attorneys, notaries, teachers of leading educational institutions of the country, and famous jurists.

On November 7, the Novosibirsk City Administration hosted the SibLegalWeek-2017 participants.

By tradition, the first joint event of the forum was a round table on the international aspects of business development.

Alexander Molotnikov, an associate professor of the Faculty of Law of Moscow State University, chairman of the board of the Russia-China Law Society, a member of the FTR of Russia, a member of the Scientific Advisory Board at the Intellectual Property Rights Court (Moscow) was its moderator. 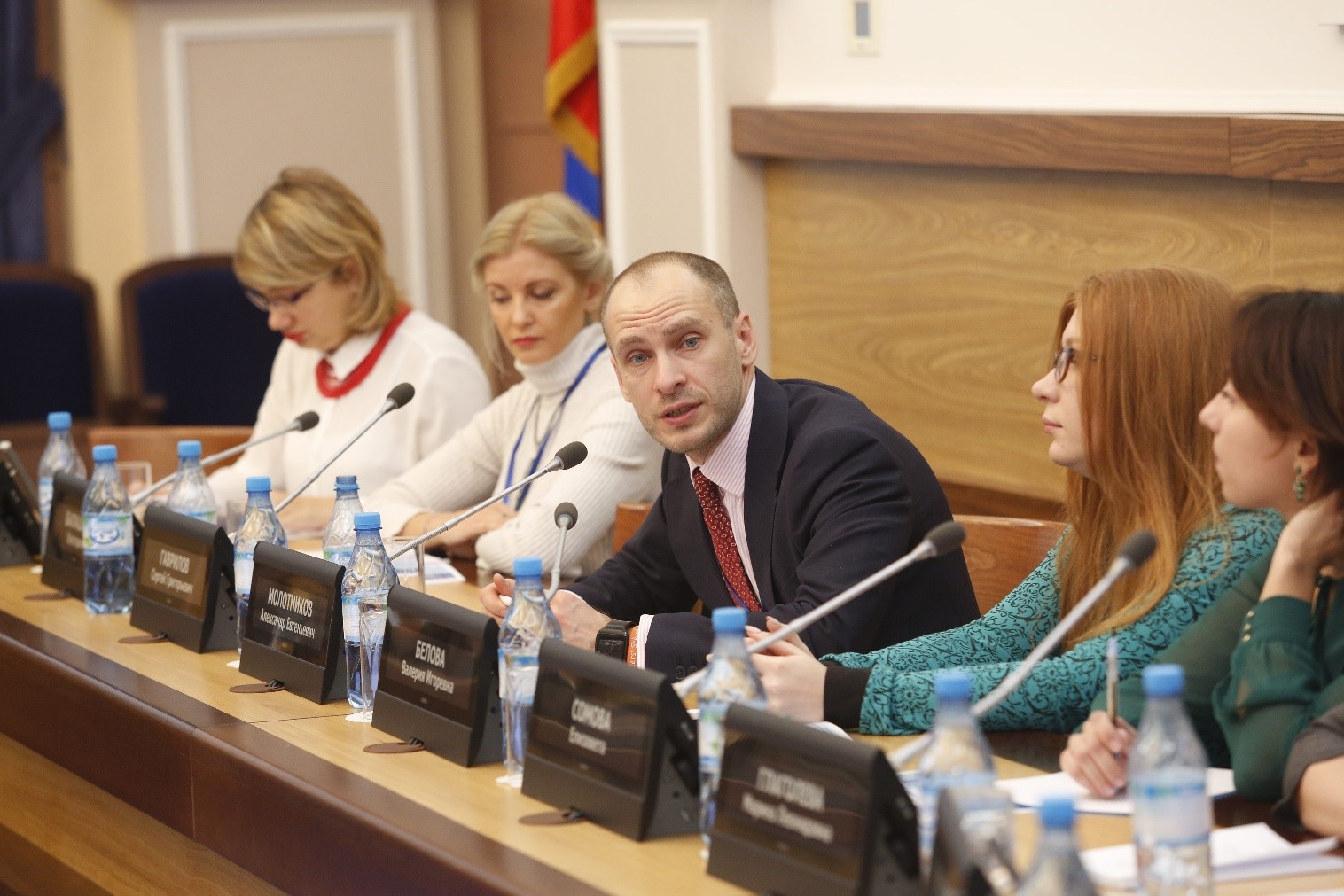 It was not without the recently fashionable topic of a "smart" contract, the conclusion and execution of which now is made without legal regulation, and that should stimulate the legislator to enact regulations.

Traditionally, in the first days of the Siberian legal week, the results of judicial fights between students of Novosibirsk universities were summed up. 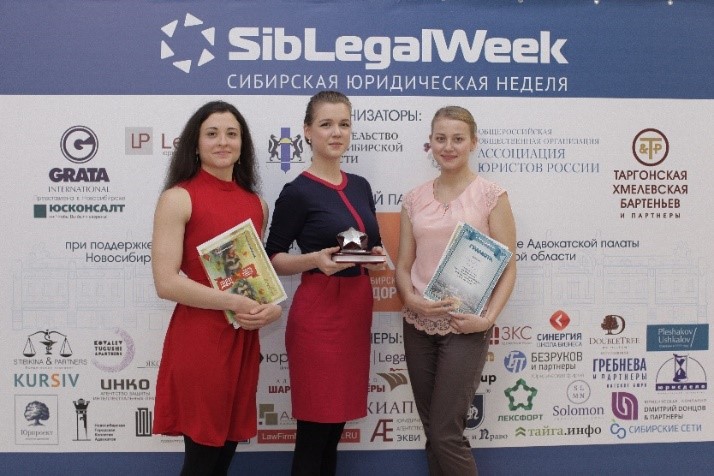 That year, on the eve of SibLegalWeek-2017, qualifying competitions took place almost in all law faculties of Novosibirsk.

On November 7, the winners of the competition were determined in the final rounds.

Together with the awards for participation the winners were presented with personal development bestsellers and certificates for attending professional events.

At the end of the first day, LexProf organized for those who were interested an excursion to the Novosibirsk Academic Opera and Ballet Theater that was the pride of our city. 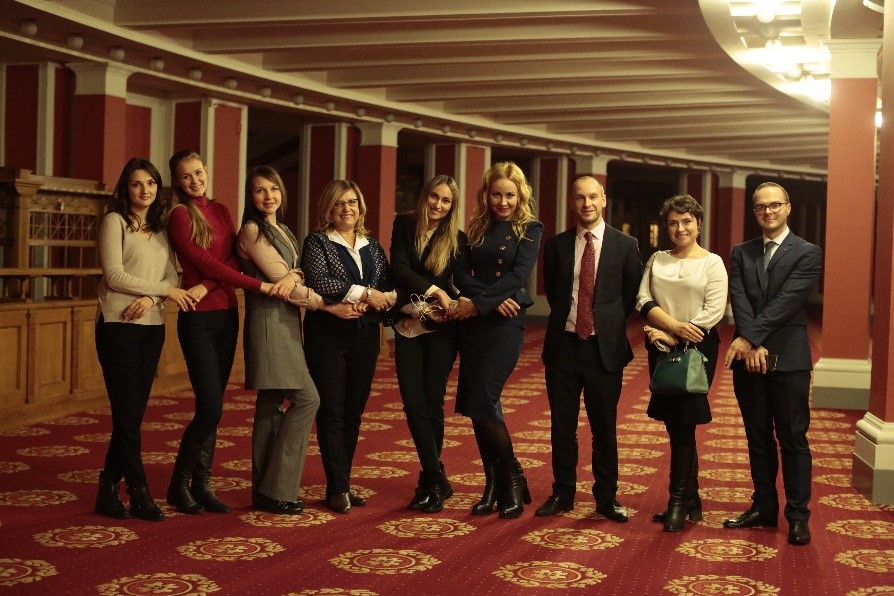 Visitors were fortunate enough to immerse themselves in a completely different theatrical atmosphere, desert silence, inaccessible during the regular performance visits, look at the "backstage" of the theater and the scene from a different angle, learn the history of the theater construction.

Moderators of the plenary session - Denis Novak, Deputy Minister of Justice of the Russian Federation, and Natalia Omelyokhina, Minister of Justice of the Novosibirsk region, built a discussion on the future of the legal profession, the forms of legal defence and the administration of justice. In the field of discussion, there were also artificial intelligence, the introduction of new technologies in the interaction of business and the state, about which the participants were told by Viktor Vyazovikh (Business Rights Commissioner in the Novosibirsk region), Vladimir Sokolov (head of the legal department of the Federal Tax Service of Russia in the Novosibirsk region), Sergei Nekrasov (deputy head of the Interregional Directorate of Rosfinmonitoring in the Siberian Federal District.

Ekaterina Smirnova, a partner of Yakovlev and Partners Law Group, who made a presentation on the problems of PPP implementation and concession in the Russian Federation, shared her foreign experience in overcoming them. The conclusion was straightforward - without the improvement of the legislation, these institutions would not work in Russia. 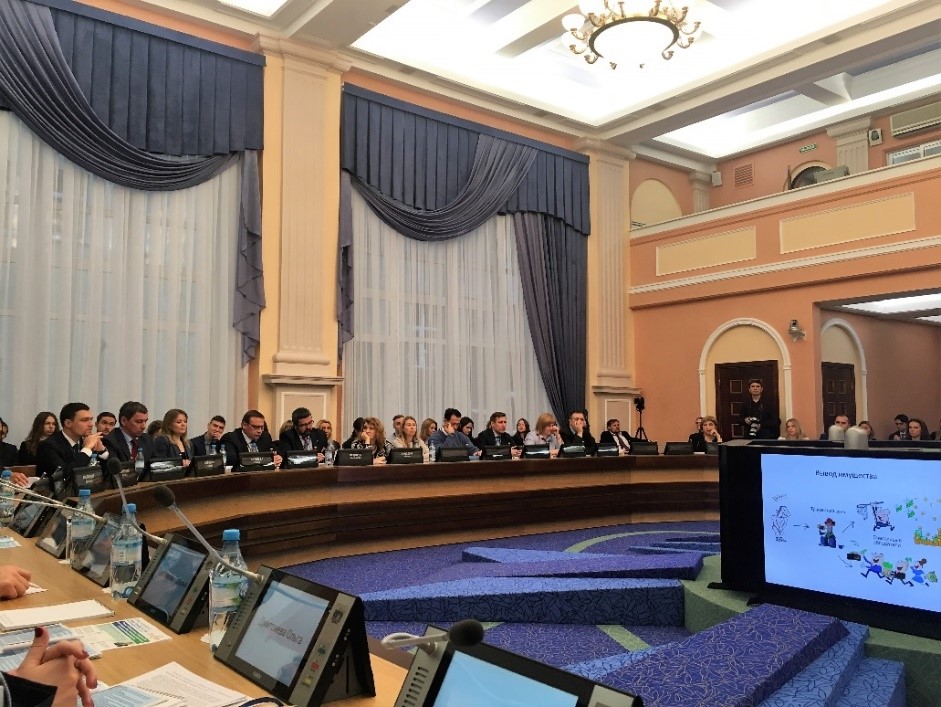 The next session was devoted to the issues of land and real estate, it was opened by D. Novak's presentation on the concept of a single real estate object. The subject aroused many questions from the participants in the discussion.

On November 9, SibLegalWeek-2017 participants again gathered in the main hall of the Novosibirsk City Administration to discuss the problematic issues of bankruptcy, corporate and criminal law.

The moderators were well-known colleagues from the legal community who arrived from Moscow and St. Petersburg: Sergey Kovalev (Managing Partner of Moscow Law Office Kovalev, Tugushi and Partners, Moscow), 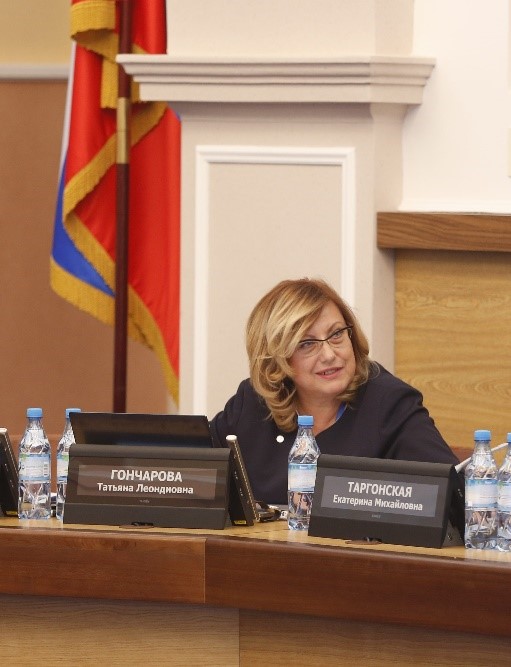 At the corporate session, the managing partner of LexProf Tatyana Goncharova made a presentation on tightening of the subsidiary responsibility of debtor controllers: the regulations which were recently introduced by the legislator require a serious attention and reflection, especially in the light of their interpretation by the federal tax authority. 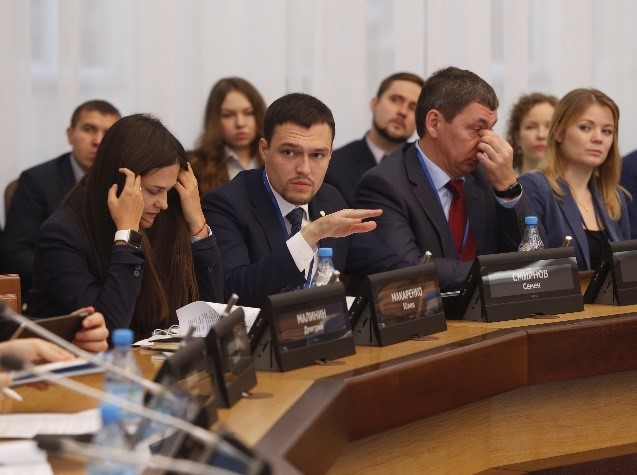 At the session on bankruptcy, the head of the arbitration practice Semyon Smirnov made a presentation on the ways of combating malpractices in the form of delaying the bankruptcy procedure implementation.

A separate session was devoted to the reform of the legal services market - Deputy Minister of Justice of Russia Denis Novak commented in detail on the new draft of the Concept prepared by the Ministry of Justice of the Russian Federation.

The themes of the concept caused a stormy discussion among the professional community — the lawyers without the status of an advocate. There were diametrical points of view about the reasonability of carrying out the reform, the sequence of actions, the requirements for advocate examinations for the "unorganized" community. 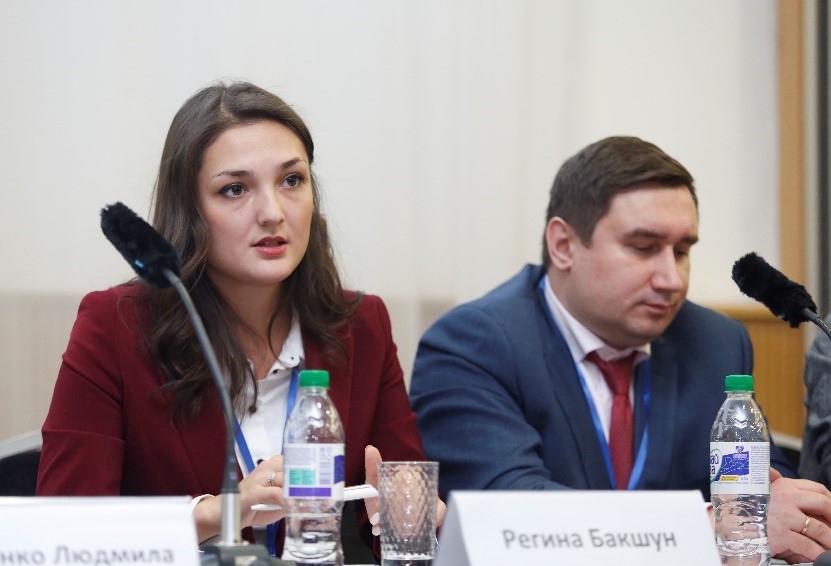 On November 10, at the tax session Regina Bakshun, LexProf lawyer - tax consultant, made a presentation on the tax risks of transferring business to another legal entity.

Each slide of Regina's presentation was accompanied by friendly waving of mobile phones, photographing systematized information and recommendations on preventing additional payments of arrears demanded by the tax authorities.

Presentations of representatives of the tax authority and the investigation committee made intensive discussions. A particularly stormy reaction of the audience 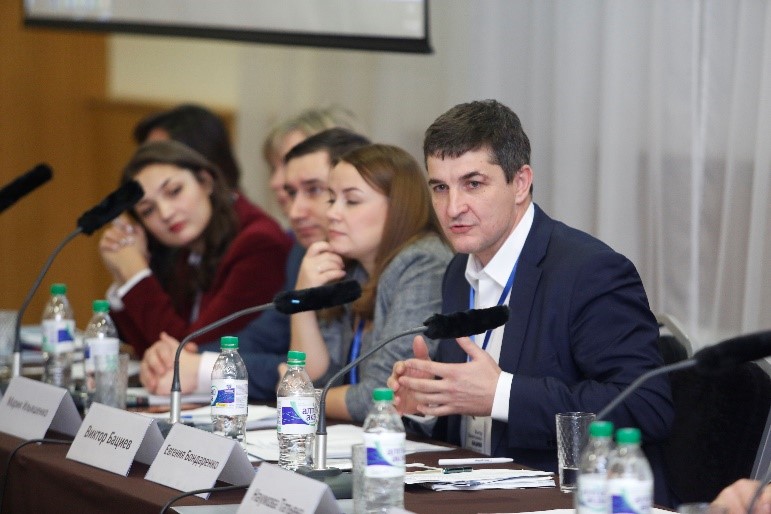 followed on the examples given by the speakers, showing a rigid vector on the interpretation of all doubts not in favour of the taxpayer and "pressing" methods of forming a body of evidence in the investigation of tax offenses.

The tax session ended with a master class held by Viktor Valentinovich Batsiev, ex-chairman of the tax bench of the Supreme Arbitration Court of the Russian Federation, lecturer of the Department of Tax Law at the Moscow State University named after O.E. Kutafin.

And, perhaps, the most interesting discussion was given to us by Anna Grishchenkova (partner of Law office KIAP, Moscow) with her master class in forensic psychology. 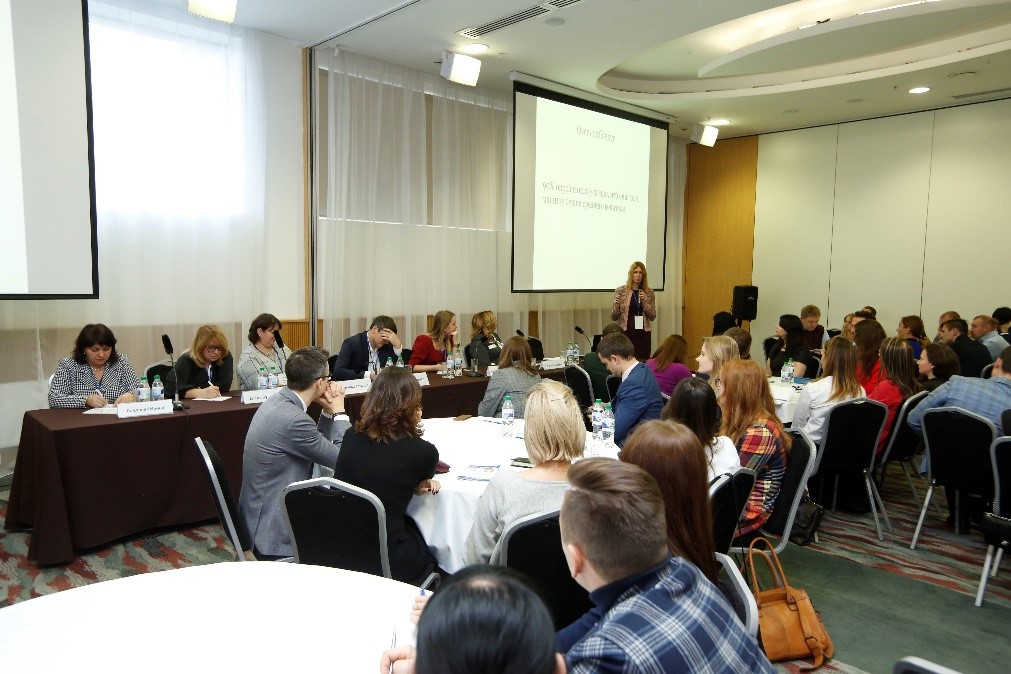 During the previous days, representatives of the judiciary traditionally attended the plenary sessions, but it was during the master class in forensic psychology that judges shared their vision of how they would like to see the work of lawyers in court, and also gave valuable recommendations on the preparation of procedural documents.

It can be said for sure that a real dialogue was held between the judges and representatives whose goal was to create conditions for fruitful work on an objective and comprehensive court proceedings, on the mutual saving of efforts and time on unnecessary emotions and useless actions, to create and maintain an atmosphere of respect, despite the initially confrontational position of the parties in the court.

SibLegalWeek was a unique free event with so many participants. All burden of expenses was incurred by three law firms-organizers. The financial support was also provided by the partners of the event, whose logos were placed on all materials and on the site of SibLegalWeek-2017, and we were very grateful to them.

The participants of the forum noticed not only a special friendly atmosphere that united lawyers of all specializations on one platform for a few days, but also a high level of speakers, which allowed everyone to supplement his professional life with new experiences 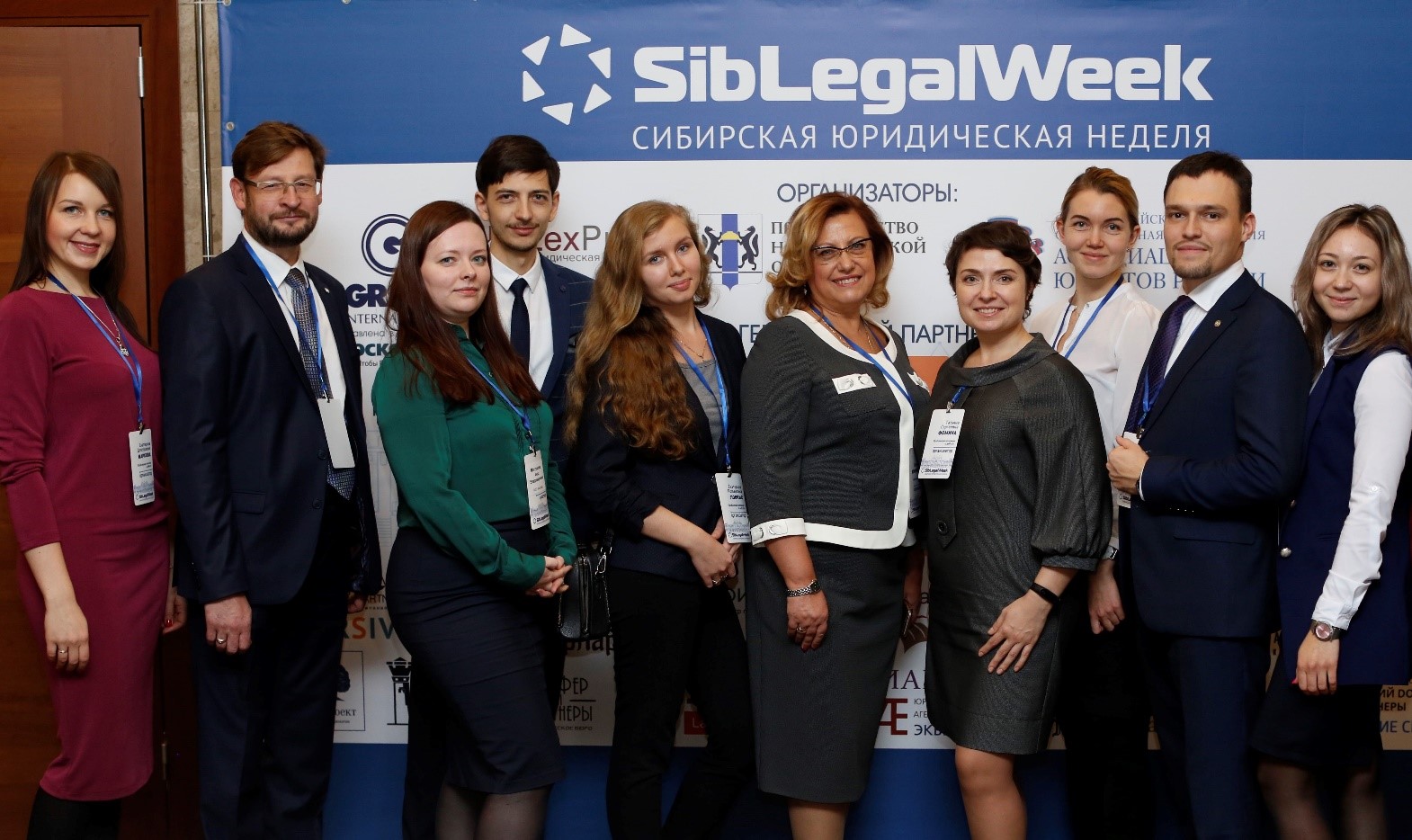 The reviews of the participants of the Siberian Legal Week, appearing in social networks at the same time with the sessions and events of the forum, showed that we - all LexProf team — did not waste so much time, put so much energy into making SibLegalWeek-2017 a truly interesting event!